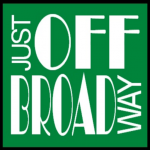 We are a community-based performing organization who seeks to provide live theatre of a professional quality at a reasonable ticket price, and to provide a cultural experience not otherwise readily available to the community. We strive to contribute back to the community we serve. Just Off Broadway also seeks to provide artists and students with opportunities to grow and learn in their fields, and to gain experience both in performance and in the technical theatre.

In 2011, after working on numerous productions at various theatre companies, a handful of theatre friends put their heads together to form a new community theatre and Just Off Broadway was formed. The five founders wanted to create a company that is fair and balanced, welcoming new actors, directors, and techies with every production in which everyone gets a fair shot. If an actor wanted to try his or her hand at the technical theatre on on the production side, or if a techie wanted to try his or her hand onstage, Just Off Broadway would be the place to try new theatrical endeavors! No experience would be necessary as long as you are open and willing to learn!

Just Off Broadway has managed to successfully mount many shows in the last few years since their inception and plan to produce many more and we appreciate all the support from both Jerusalem Evangelical and Epiphany as well as the communities in which these churches service.